skip to main | skip to sidebar

Greetings from Lubango! Meghan and I drove to Lubango yesterday because
Jackie received her visa and she arrived yesterday - yoohoo!!! Jackie
received her visa just in the nick of time - on Wednesday and flew out
from USA on Thursday! It will be a fun two months!

Today we travel back to Tchincombe and also traveling with us are Roy
and Gwen Comrie who are speaking at our SIM's Spiritual Life Conference.
They arrived on the same plane as Jackie. We then return to Lubango on
Thursday - a little grueling to travel these roads twice in one week -
but you do what ya gotta do!

SP (Samaritan's Purse) is going to purchase 129 animals from Tchincombe
to send to the area of Cavango. They will be a great blessing to help
families in that area rise above subsistence standards!! Stirling and
Tuciale will be involved with arranging transport for these animals and
helping to get them established. It is exciting to be at a stage in the
life of Tchincombe to begin to reach out to meet the wider needs in
Angola!

Stirling and the guys will be starting to install the new pump - it's a
massive job to put the pipe in one section at a time to go down +300ft -
it will take about 4 days.

Thinking of the future please continue to pray for the Foxes and for the
Verhoefs as they prepare for service in Angola!

Paulo's mother had surgery last week at the CEML for cancer in her
mouth. She lost a lot of blood (not unusual for mouth surgery) but is
doing well. It has been a hard 1 1/2 years for Paulo and his family -
remember his sister died, his stepfather killed a man in a drunken brawl
and then committed suicide some days later. Pray for Paulo's Mom that
she would come to know God's peace in his heart.

We brought another herdsman from Tchincombe to CEML with what appears to
be a bony tumor on his leg. His name is Pinto Miguel. It is the first
time he or his family have ever been to town! Pray that he would
experience the love of Christ at the CEML.

Until the next time - THANK YOU for praying!!
Donna for all of us!
Posted by Kate at 10:40 AM No comments:

The laptop is talking to the sat phone so we're in business again!!

Hi! The laptop is talking to the sat phone so we're in business again!!
A big thanks to Gary, Doreen and Rob (MAF colleagues) who searched the
net for the driver for the serial to USB cable while Stirling was
shopping and doing other business in town!!

Stirling arrived home at 11:30PM last night vividly reminded that he was
in Angola! He couldn't get fuel at any of the 3 places he stopped!
Thankfully a farmer friend gave him 20L of fuel to get home! Stirling
says he has to get used to the roads again . . . slow. . . and jarring;
and on the way a bolt on the axle of the trailer broke so he had to come
even more slowly - a testimony to the harshness of the roads!

Thanks for your prayers! Feel free to write - we will receive all
messages under 100K here at Tchincombe - all messages over 100K will
just wait at the server till we go to town.

Pray that Jackie (teacher) and Heather (vet assistant) will be issued
their visitor visas!! There has been no movement on visas at the
embassy! Jackie plans to arrive on 24 June. Heather should have been
here already.

We had a good weekend and feel much more rested! School with J&M went well this morning – our first day back since starting our return journey to Africa so we have some catch up to do!! Stirling is going to town tomorrow and he’ll send these e-mails via the internet! We are still working on a solution to do e-mails from Tchincombe – we think that we can put our server software on our desktop (Shelley has downloaded it to CD for us – we did not have a hard copy only what’s on the laptop and we couldn’t copy that on to disk) until we can get the cable to connect our laptop to the satellite phone. We would prefer to do the e-mails on one computer and since it’s hard to take the desktop to town we’ll try and find the appropriate cable – we are told that serial to USB cables don’t always work!!

PRAISE - The well drilling company DID come and clean out the well while we were away!!! Wonders never cease!! We bought the new motor in Windhoek and so we’ll be installing it soon. Then we’ll need to lay 10 km of water pipe so that the animals can get to the edges of the farm to eat the grass there!

THANKS for standing with us in these months!

Donna for all of us!

Greeting FROM Tchincombe on Wednesday June 6!

Greetings FROM Tchincombe on Wednesday June 6! We are home!! We arrived last night at 6:45PM! We had a good night’s sleep and have been busy! We took 3 days to come up so we’re not so travel weary but we did enjoy a peaceful night’s sleep last night. The last two nights we were camping just outside Etosha Game Park (we spent Monday in the park) at a place called Onguma. And the lions were calling to each other almost all night from outside the fence – and even though the camping ground was fenced it wasn’t as restful sleeping as it could have been but it was . . . .adventurous!!!

WELCOME to those of you who are new to Tchincombe Updates – thanks for signing up to pray - we really appreciate it!!

Our old batteries for running the solary system are definitely kaput (we knew they were weak when we left) so Stirling has had to spend the day putting in the new batteries (THANK YOU to our family at GBC)!

The kids have been hanging out putting their stuff away and playing with the things that they haven’t seen for 6 months!

It seems that things ran well during our absence but we haven’t had time to hear all the story just yet!

Guess what?!!? Just discovered that our new computer does not have cables to talk to the satellite phone!!! SO – I don’t know when you’ll get this e-mail!! We’re working on a solution!

Thursday – talked with colleagues in town about getting the appropriate cable for computer/sat phone – Rob (MAF) is getting in touch with sat phone shop about ordering a cable – only get here earliest on 24th June! Meanwhile, Peter (SIM) heard our HF radio discussion and said he has said cable that we can borrow for the mean time – we’ll be able to get it early next week when we go to town – YEAH!

After talking with Rob and Peter Stirling remembered he had a cable for the old GPS we had – it’s the right thing – YEAH but wait . . . .no driver .. . . .searched high and low and found many other disks but not a driver disk . . . . waiting to go to town to download driver and/or borrow Peter’s cable if he has a driver . . . more waiting!

It's good to be home! 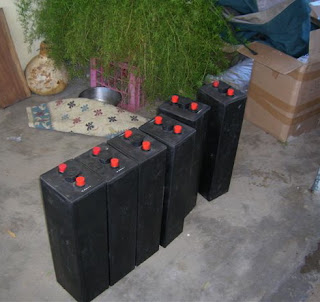 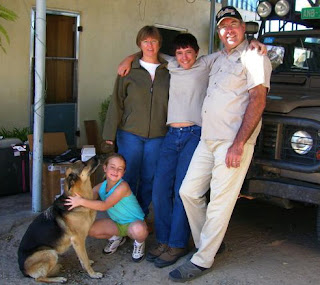 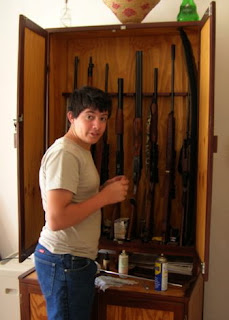 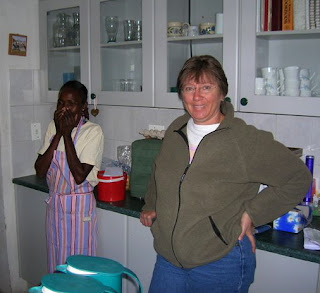 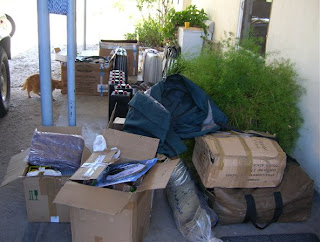 With Shelley and Peter 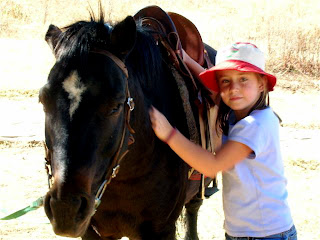 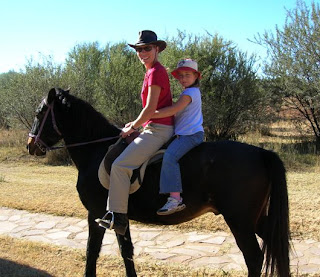 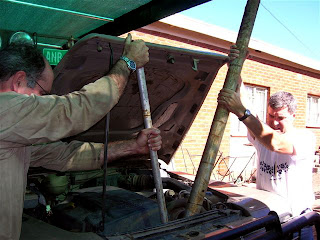 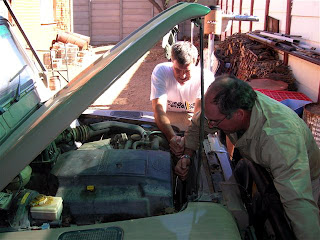 Stirling and Peter working, Meghan and Shelley enjoying a ride.
Posted by Kate at 11:56 AM No comments: 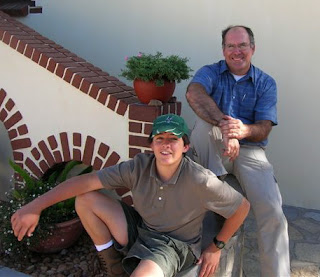 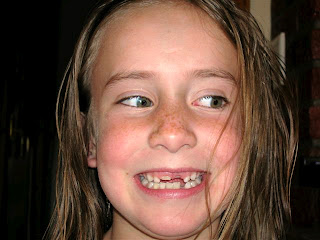 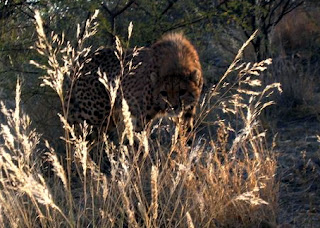 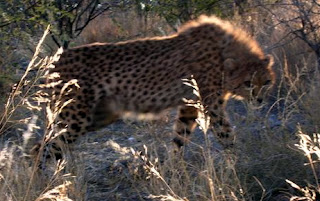 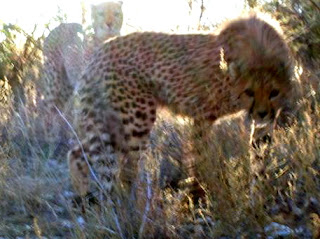 Our vision is to use Tchincombe Ranch as a commercial production unit serving a two-fold purpose:

·To reach the Mungambwe, an unreached people group, for Christ and establish a growing maturing, church among them.

Our goal is to have Tchincombe Ranch be a self-sustaining commercial unit in order to offer apprenticeships in four areas: animal husbandry, field agriculture, machine maintenance, carpentry/construction/agro-forestry. Young people from all over Angola will be able to take these apprenticeships (i.e. not just a ministry to the Ovangambwe but a broader ministry to help Angola as it rebuilds after the civil war).

Okameni (o-ka-men-ee) Good morning
Okunyanga (u is long, a's are short) Good afternoon
Okulivelela (oku-lee-ve-le-la) Good evening
Ondaka (spoken word)
Huku (Creator God)
So Ondaka ya Huku is the Word of God (which is what the Ovangambwe call the Bible)

To support our ministry go to.....

We'd love to hear from you!