skip to main | skip to sidebar

Greetings from Windhoek, Namibia! We made it safe and sound – of our 9 bags – only 8 showed up initially – the one went missing temporarily but was delivered to us by the airline the next day. It had been thoroughly rummaged but nothing was missing – thankfully!!

We applied anti-itch stuff to Meghan regularly and she managed very well - the poison ivy is drying out very quickly!

Friends who borrowed our car while we were in the US said it was making a strange noise so Stir checked it all out yesterday and found that it had a very GOOD reason for making a unusual noise!! We are glad that our friends made their whole trip without a breakdown! There are several bolts busted on something to do with the crankshaft stabilizer! It’s actually all related to some work that Stir had done before leaving Tchincombe in December. It’s all apart awaiting the opening of the shops on Monday! As soon as the repair is done we’ll head up to Angola. Thursday? Or Friday?

All Jeffrey wanted/wants for his birthday (was April 14) is a puppy that he can train to use for hunting. Pray as we look for just the right hound! So far we aren’t turning up any Labrador retrievers in this area which is his ideal! We will go to the SPCA on Monday to see what’s there.

THANK YOU for your prayers!!!

Donna for all of us!

We had a great day canoeing with friends today!! It’s something we’ve wanted to do and hadn’t had the chance- so we did it today! It was really gorgeous and we all got a dunking out of it – except for Stirling! If you have the chance to ‘canoe the New’ then do!! (the New River)

We’re starting for Angola tomorrow morning! It’s 8:41 PM – and the bags are almost packed! We have to be at the airport at 4 AM and hurry to NY where we’ll then wait until our Jo’burg flight leaves at 5:20 PM! We’ll overnight in Jo’burg and fly to Windhoek on Thursday. In Windhoek we need a day or two to shop and get the vehicle ready for the drive up to Angola!

We return fully supported and needing only $4,400 to complete the car project!!

THANK YOU for your prayers and gifts that our trip back to Angola a reality!

Until the other side of the ocean!

Donna for all of us

PS Pray especially for Meghan as she has a pretty bad case of poison ivy on her legs so travel won’t be very comfortable!
Posted by Kate at 6:09 AM No comments: 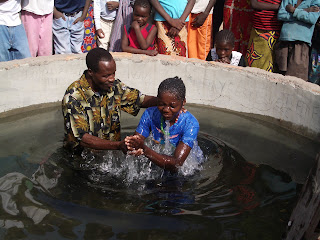 One of the young people being baptized Oct. 2005. 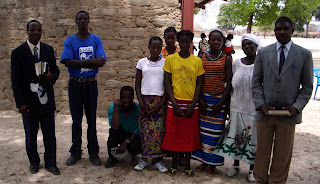 Six young people baptized October 2005- Pastor Jacob and his wife, Mariazinha are on the right, Pastor Lino is on the left. 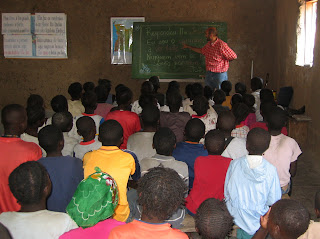 Children in on of 5 classes (K-4) at Tchincombe school.

The church choir at Tchincombe during the recessional.
Posted by Kate at 2:04 PM No comments:

Our vision is to use Tchincombe Ranch as a commercial production unit serving a two-fold purpose:

·To reach the Mungambwe, an unreached people group, for Christ and establish a growing maturing, church among them.

Our goal is to have Tchincombe Ranch be a self-sustaining commercial unit in order to offer apprenticeships in four areas: animal husbandry, field agriculture, machine maintenance, carpentry/construction/agro-forestry. Young people from all over Angola will be able to take these apprenticeships (i.e. not just a ministry to the Ovangambwe but a broader ministry to help Angola as it rebuilds after the civil war).

Okameni (o-ka-men-ee) Good morning
Okunyanga (u is long, a's are short) Good afternoon
Okulivelela (oku-lee-ve-le-la) Good evening
Ondaka (spoken word)
Huku (Creator God)
So Ondaka ya Huku is the Word of God (which is what the Ovangambwe call the Bible)

To support our ministry go to.....

We'd love to hear from you!